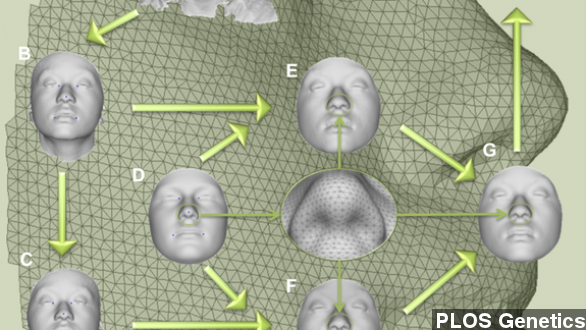 By Briana Koeneman
March 22, 2014
What if you could create a mugshot using only a single strand of their hair? Thanks to new research, we're getting closer to doing just that.
SHOW TRANSCRIPT

What if you could create a mugshot of a criminal using only a single strand of their hair left behind at the crime scene? Well, thanks to new research, we're getting closer to being able to do just that.

A team of researchers led by anthropologist Mark Shriver of Penn State University made headlines Friday with this: a computer program that can create an accurate model of a face from a DNA sample. (Via The Verge, Nature, TIME)

Now, using genes to predict eye and hair color is something scientists can do pretty easily already.

But using DNA to determine the structure of the rest of the face is a whole other story, Shriver said in the study published Saturday in PLOS Genetics.

To create the program, the scientists recruited about 600 volunteers with mixed European and West African ancestry living in the U.S., Brazil and Cape Verde and took high-resolution images of their faces.

Nature reports the team used those images to create computerized 3-D models, which were then made into digital meshes made up of about 7,000 data points.

The scientists used those meshes to measure how genes associated with ancestry and gender affect facial structure. (Via PLOS Genetics)

According to Scientific American, the researchers then tested each volunteer for 76 genetic variants that could cause abnormalities in the face when mutated. From there, they were able to pinpoint 20 of those genes that can be specifically traced back to facial shape.

The computer program the team designed takes that information and uses it to turn a DNA sequence from an unknown person into an image of what that person looks like. (Via YouTube / Stated Clearly)

Pretty cool, but Shriver and his team have a lot more work to do to perfect the program.

A biologist told TIME some basic facial characteristics are tough for the program to predict. "One thing we’re certain of: there’s no single gene that suddenly makes your nose big or small."

And, as The Verge points out, the researchers also need to conduct similar studies in different areas to see if they can successfully replicate their results.

But back to the mugshots. For now, the results of this kind of facial analysis aren't allowed in court, however they can be used to help identify potential suspects.