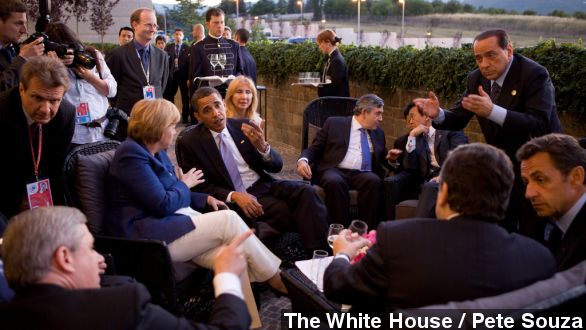 By Matt Picht
March 2, 2014
The governments of seven leading countries issued a statement saying if Russia keeps troops in Ukraine, there will be no summit in Sochi.
SHOW TRANSCRIPT

Russia's military actions in Ukraine are starting to have repercussions. Late Sunday the leaders of seven leading nations issued a statement suspending their participation in the upcoming G8 summit in Sochi, Russia.

The statement, published simultaneously by the governments of Canada, France, Germany, Italy, Japan, the U.K. and the U.S., said Russia's actions on the Crimean peninsula "contravene the principles and values on which the G-7 and the G-8 operate."

"This is not the threat. This is actually the declaration of war to my country." (Via The Guardian)

The move has been repeatedly condemned by Western countries. On CBS's Face the Nation, Secretary of State John Kerry warned Russian President Vladimir Putin not to put more troops into Ukraine.

Kerry repeated the threat on NBC's Meet the Press, adding "He is not going to have a Sochi G8, he may not even remain in the G8 if this continues."

Suspending Russia's G8 membership could be just the start. Businessweek reports the Russian Ruble weakened Sunday amid talk of sanctions and economic isolation from Western nations.

Still, it's unclear whether these measures will have much impact on Russia's decision making. A Slate writer says "There are no consequences—none that the United States could credibly threaten—that would keep Putin from doing whatever it takes to hang on to Ukraine."

And a writer for The Guardian points out President Obama can't afford to move too strongly against Putin.

"He needs Russian help with key foreign agenda items – Iran and reducing nuclear proliferation. He needs Moscow if the Syrian war is ever to be halted. He is short of cash. And, it can be assumed, he lacks public support from a war-weary American public for any new foreign adventure."

Russia, for its part, has claimed its actions in Crimea are to protect the Russian-speaking population. The region is a bastion of pro-Russia sentiment, despite the recent revolution in Kiev.