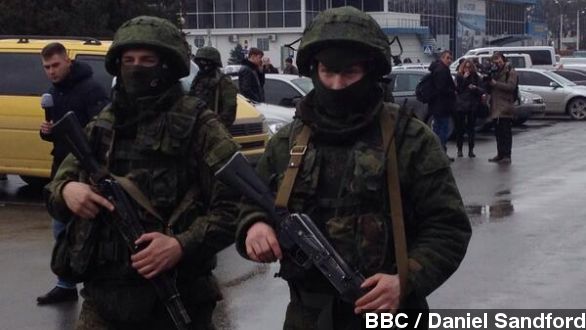 By Matt Picht
February 28, 2014
After reports of Russian troops on the streets of Crimea, President Obama warned Russia not to violate Ukraine's sovereign territory.
SHOW TRANSCRIPT

The crisis in Ukraine has shifted from Kiev to Crimea. Ukraine's fledgling government has accused Russian troops of illegally entering Crimea.

Early Friday unidentified troops poured into Crimea, occupying two airports in the region. The troops didn't noticeably interfere with the region's normal state, but Voice of America reports their presence might constitute a violation of Ukraine's sovereignty.

Tensions between Ukraine and Russia heightened after video surfaced of Russian helicopters flying over Crimea, and a Russian warship blockading the entrance to Crimea's Balaklava Bay. (Via MSNBC)

And unnamed U.S. officials confirmed to The Washington Post late Friday that Crimea has seen an influx of Russian troops.

"I personally address President Putin with the demand to end the provacation and call back the troops from the autonomous republic of Crimea." (Via Al Jazeera)

And the occupation drew strong condemnation from President Obama.

OBAMA: "The United States will stand with the international community in affirming that there will be costs for any military intervention in Ukraine." (Via The White House)

But it's not quite clear what those costs could be — the U.S. has limited economic and military influence in the region. A military analyst for CNN says America needs to act in concert with its European allies to discourage Russia from clinging to Ukraine.

"The initial steps right now should be, 'What can take place now short of military action that would be sufficiently convincing to Putin that he needs to stop what he's doing?'"

For their part, Russian officials have been careful to avoid any talk of invading Crimea. A Defense Ministry Official told Pravda, Ukraine's "sovereignty under the conditions of an internal conflict can not be broken."

Russia's U.N. ambassador Vitaly Churkin told reporters Russia was just acting under the terms of previous treaties to protect its naval base in Crimea's Sevastapol.

"As you know we have an agreement with Ukraine on the presence of the Russian Black Sea fleet in Sevastapol, and we are acting within the framework of that agreement."

It's also worth noting Crimea has strong cultural ties to Russia, and the Kiev revolution has been met with skepticism and hostility in the region.

As the BBC found out, most Crimeans aren't particularly bothered by the prospect of Russian occupation. "Who else can we turn to? Who can defend us? Thank goodness the Russian fleet is here to defend us."

The events in Crimea come just two days after Russia conducted a series of surprise military exercises on the border between Russia and Crimea.