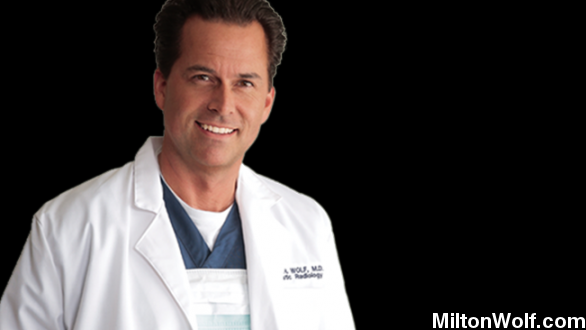 A U.S. Senate candidate has apologized for posting Facebook images that poked fun at gunshot victims.

Kansas-based radiologist Milton Wolf allegedly posted several X-ray images of patients, some deceased, and engaged in insensitive dialogue about them with other Facebook users. (Via Milton Wolf)

The Topeka Capital-Journal reports one of the photos shows a deceased patient with an improperly positioned head and Wolf joked the patient wasn’t going to complain about it anyway.

The paper reports an X-ray image showing a person decapitated by gun shots is labeled “one of my all-time favorites.” Wolf adds: “What kind of gun blows somebody’s head completely off? I’ve got to get one of those.”

Although the images have since been removed from the doctor’s profile, The Topeka Capital-Journal released dozens of images and comments from Wolf and other Facebook users.

Wolf was confronted with the images by a reporter who questioned whether this was an invasion of privacy or even unethical.

“Look, if you don’t identify a person, then you don’t need their permission, you’re aware of that?” (Via The Topeka Capital-Journal)

​Wolf has since issued an apology — saying, “To those I have offended, I am truly sorry and I ask for your forgiveness.”

Politico reports a spokesperson for the National Republican Senatorial Committee called Wolf’s behavior regarding the images as “freakish.”

Wolf says he’s a distant cousin of President Obama but that he disagrees with the president on just about everything.